by The Shamey Jays 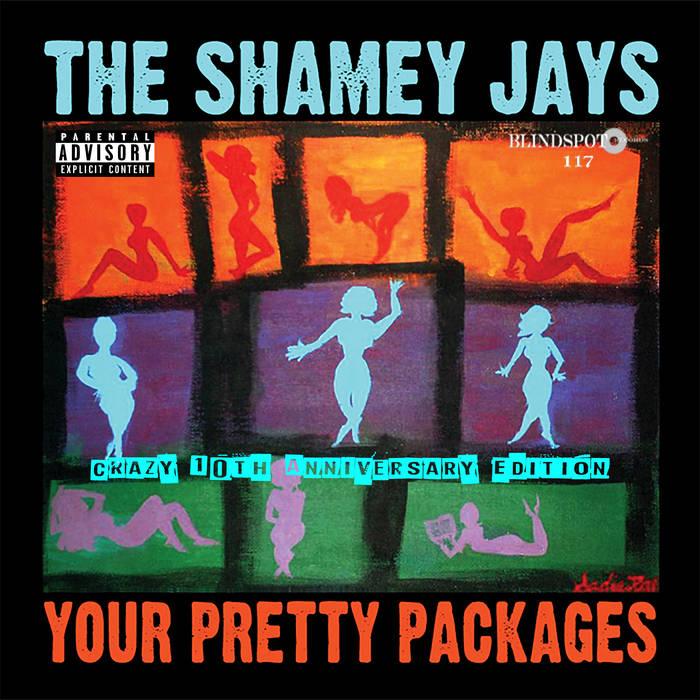 What’s missing from the airwaves these days? Quite simply, it’s a return to straight ahead rock and roll, the kind that should not be relegated to tribute shows commemorating some Golden Musical Past. A solution? Meet The Shamey Jays. Rather than the whiny, self-indulgent glop some rock bands are throwing up on the wall these days, The Shamey Jays offer up “songs that don’t make you think or cry.”

The Shamey Jays play what they call “indie garage-rock goodness.” It’s a sort of rock and roll lasagna, layered with gritty guitar riffs and leads, filled with musical and lyrical hooks and smothered in a sauce of top-notch song craft.

Their debut long-player, is “Your Pretty Packages” (Blindspot 117). The CD collects twelve songs, with ten of the tunes penned by San Diego songsmith Dave Howard, who has written songs for numerous artists including A.J. Croce, Gregory Page, Berkley Hart, Carolann Ames and the Coyote Problem. Spud Davenport contributes the remaining two songs to round out the album.

As dynamic as “Your Pretty Packages” is, the twelve songs on offer were honed on the road and that remains the best way to take in the Shamey Jays experience. However, short of having the band come to your house to perform, this CD is the next best thing, play loud and play often. Whether you see The Shamey Jays in concert or listen to their new album, the end result is the same. Even those who don’t come in as fans leave as converts.

Dave Howard was active in the San Diego music scene from 1990 - 2018.
A multi-year nominee for the San Diego Music Awards, Howard's songwriting and stage chops caught the attention of his peers and coffeehouse patrons. This allowed him to collaborate and hang with the emerging artists of the time. Dave has released acoustic, garage rock (The Shamey Jays) and ambient electronic music (Upaya) ... more