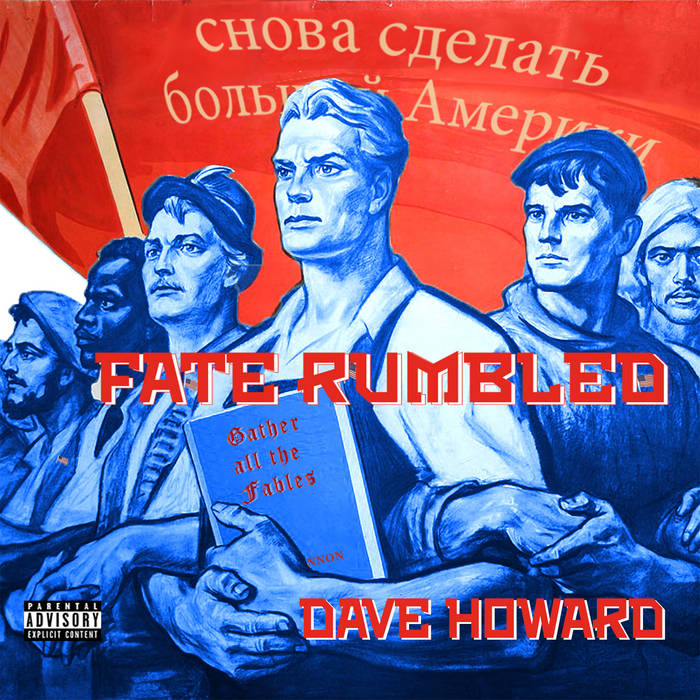 The current socio-political climate in the U.S. and the madcap adventures of the Tweeter-in-Chief will certainly be documented in books and blogs for years to come. But can an independent singer-songwriter deliver a potent and captivating concept album that puts it in the artist’s perspective? If you’re Dave Howard, the answer is “Yes, it’s ready.”
“Fate Rumbled” is the latest recording by San Diego singer-songwriter Dave Howard who describes the album as a “song cycle that exposes an emperor with no clothes” The song ideas and lyrics were developed and written during the 2016 presidential campaign in the months leading up to the election. “I was on a flight to Honolulu just freewriting. These were my observations and reactions” Howard says, “to what was happening, what was incubating, what was deteriorating. I was riveted by the craziness that overtook the press, the candidates and the electorate. It was like seeing a wreck on the highway and being unable to look away.” Without naming any names, Howard vents his frustration and shares his lens on the personalities and behaviors that are unique to the new “normal” And while Howard has been typecast over the years as a balladeer of love songs, Fate Rumbled shows off this veteran songsmith’s diverse musical palette, sharp lyrical edge as well as his studio chops at the controls.
This time he’s playing all the instruments, singing all the vocals, producing and recording. “For the last year I had these lyrics but no music.” he says. “I was getting all twisted up in my straight corporate gig. I was so stressed out that I got physically ill. I went on a leave of absence and ultimately resigned and I had time to actually pick up my guitar and doodle on the keyboard. I started recording some tunes that were in my bag from the last few years. As soon as I did that, the music for the songs on Fate Rumbled just poured out. One by one I would write music, record parts as they came to me, then move on to the next song. As I went on, the album concept started to emerge. Things moved really fast.” Howard wrote and recorded all the tracks during the month of June, 2017 and finished mixing at the end of July. His wife Terri watched him go out to his garage studio and disappear for a few hours then come back in and say “Check this out!” Howard recalls, “She had never seen me work like that in the studio before. She was surprised at the pace of my process.”
The album is comprised of nine songs, coming in at just over 37 minutes. “It’s not a rock opera. I don’t want to force a storyline into people’s heads.” says Howard. “Some of these songs are caricatures, while some are just manifest frustration and anger” says Howard. “But not all of them are political statements. There are a few songs that are more personal to my own principles and how I developed the world view that shaped the rest of the album.” The story goes the way it goes.” he says. No matter how it ends, we’re all going to wake up and do our thing the next day.”
“Fate Rumbled is probably my favorite track. It’s a thought poem of loose associations, as I imagine Trump’s cognitive process works. It has a simple song structure. There’s nothing sophisticated about the music but the mood is set with the instrumentation; grand piano, guitar, bass, drums, strings all build to a big crescendo then crash and start over again. In that way it’s just like what we’re seeing on the news and social media.”
The first single was “Gather All the Fables”. There is an accompanying YouTube video for that track as well as the title track,. “Fate Rumbled” was released on January 23, 2018 via his website (www.davehowardmusic.com) and on streaming platforms including iTunes, Spotify, Amazon and others. A limited number of CDs are available for those who still prefer them.

Credits
Dave Howard performed all vocals, guitars, bass, keyboards,
drum and orchestral instrument sampling and sequencing.
Recorded and mixed at Upaya Music in Poway, California.
This record could not have been made without the unwavering
and enthusiastic support of my amazing and beautiful wife, Terri.
Press, performance and publicity contact
Dave Howard
dave@davehowardmusic.com

All words and music by Dave Howard.
Published throughout the world by Upaya Music.
All rights reserved. © 2018 Upaya Music (SESAC).

More music from Dave Howard can be found at
www.davehowardmusic.com

Dave Howard was active in the San Diego music scene from 1990 - 2018.
A multi-year nominee for the San Diego Music Awards, Howard's songwriting and stage chops caught the attention of his peers and coffeehouse patrons. This allowed him to collaborate and hang with the emerging artists of the time. Dave has released acoustic, garage rock (The Shamey Jays) and ambient electronic music (Upaya) ... more